A few days ago @lastknight gave me a strange cardboard package. I have no idea of what it was. “It’s a Google Cardboard” he said. Wasn’t helpful. Still no idea.

After a couple of Google search everything was clear. The strange package he gave me is a Knox V2: one of the implementation of the Google Cardboard project.

Virtual reality (or “VR”) is one of the most interesting topic in tech business. Since when Oculus VR was acquired by Facebook during March 2014 for about 2B$ everybody think VR will be one of the next big thing in many fields: from game to surgery. I had the opportunity to test Oculus Rift only once at Codemotion 2014 in Milan (a surgery test simulator). Experience seems really realistic but I have no idea about how could be for an extensive use.

My iPhone 5 doesn’t support cooler apps (like Vrse that seems really cool) but I was able to test Roller Coaster VR, a simple roller coaster demo:

More and more application are available, here is a list of best apps select by the Huffington Posts. Anyway my thought about VR are not about the quality. Application are still poor. They don’t give you an headache like a few years ago but aliasing, clipping and other 3D related glitch are still there. Quality could improve a lot more and is doing. I’m more interested in real world use of a VR kit.

So I asked my family to test the Knox.

First impression is of a new, cool and fun way to enjoy media. Gaming is hard but really immersive and the roller coaster demo is addictive. My parent aren’t familiar with cutting edge technologies but they were happily involved in the new experience. Gaming and documentaries can benefit this new way to interact.

In the end Google Cardboard isn’t confortable. Smartphone position inside the box is fundamental and sharp corners hurt my big nose. But I think is the first step of the next big thing. We are ready and I really look forward to find what the future holds. 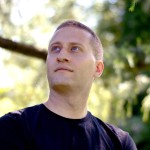 Freedom is my religion.

View all posts by Andrea Mostosi →

One comment on “Are we ready for Virtual Reality?”

This site uses Akismet to reduce spam. Learn how your comment data is processed.